The Bank Alt's Days Are Numbered


Charyeise has worked hard (more so at first than lately), but this was only a temp job for her. The experiment is officially over, with only deciding what to do with her gold and possessions left to consider.

The stats were not as good as I hoped, but still good enough to persuade me that an inscription profession on a low-level bank alt is definitely the way to go to fund characters when starting on a new realm.

During the last two weeks, Charyeise spent about 15 minutes a day doing a quick cancel/post. A couple times a week, she milled herbs and stocked up her small selection of glyphs. This took an extra half hour each time, so her total time spent per week was reduced to 2.75 hours.

Moonrunner has a very slow-moving economy. The population is fairly low and the auction house stagnant. Trade chat is very minimal, with seldom even a troll to keep her amused during her work hours.

She did encounter a lovely mage, who invited her into her small guild and chatted her up occasionally, and once the inventory is liquidated, all Charyeise’s earnings will be deposited into the vault of that guild. I expect it will surprise them rather a lot to see the amount!

Posted by Imraith Dos Santos at 12:41 PM No comments:

Poor Charyeise!  So busy with her career she had no time to advance in her Adventuring!  Perhaps next week she will make it to Level 20 and delve into all those new glyphs that will become available.

But for now, the report of her activities thus far: 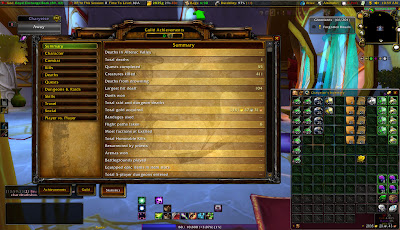 As of today, she has made a total of 6,381 gold.  She has a nice selection of inks and parchments in her bag, along with 2,835 gold.  There are 153 items posted for sale on the Auction House.

Hopefully she will reach level 20 this week, and once her Adventuring ends, she will cut her hours invested by a substantial amount.
Posted by Imraith Dos Santos at 2:13 PM No comments:

A Week Later: The Bank Alt Grows Up 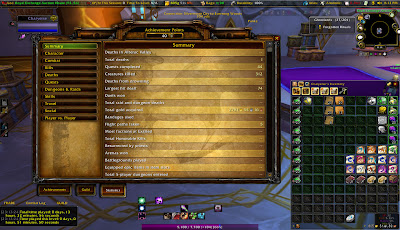 Charyeise is a RealLife week old now and has begun to prove herself in her profession, as the screenshot shows.

At this moment, she has 126 items for sale on the Auction House, a small supply of ink and 805 gold in her pockets.

Next week, she plans to advance to Level 20, which will give her a greater variety of glyphs to make.

Posted by Imraith Dos Santos at 11:32 PM No comments:

After the Holiday ... Day Four of Bank Alt Training

Charyeise took a couple days off for the holiday (Imraith Inc. is very generous that way to their employees ;) but she is now back to work, rested and ready.

Her mailbox had 620g in it, which was a little less than expected, but enough.  Today was bag day.  She purchased three Bag of Endless Pockets for about 25g each, and since frostweave bags are running over 200g on this server and Netherweave bags around 29g, she ran to the bag vendor and bought a 14-slot for 11g.  She bought 3 extra 14-slots and posted them for 29g each on the AH, since no one seems to be selling these.  (While the focus is on glyphs, she saw no reason not to to make an easy profit on a small sideline.)

She also bought a few herbs.  Herbs were very expensive this morning, so she will check back this evening for better deals.  She scanned the AH and made a few of the higher priced glyphs, posted them and called it a morning.  Time for coffee!